The Second World War, and especially the German-Soviet confrontation, plays a big role in the modern political discourse of the Russian Federation. Therefore, it was hardly a surprise for anyone that its theme was actively used in state propaganda aimed at justifying and glorifying the invasion of  Ukraine. You can hear it from President Vladimir Putin personally, telling the soldiers that they are  “fighting for the Motherland, for its future, so that no one forgets the lessons of World War II. So that there is no place in the world for executioners, punishers and Nazis”. It comes from the lips of veterans such as Ivan Lytkin, declaring that “The enemy has approached us again and we are again entering the battle to defend our Motherland. I thank our President Vladimir Putin for issuing a decree to protect the new Ukrainian people’s republics. Today they attack our heroic history. The Americans, I mean the ruling  circles of the United States, act on the principle of Hitler of fascist Germany.” The television programs and newspaper articles exploiting this topic are all the more so innumerable. However, if we look at examples of Soviet agitation during the so-called Great Patriotic War, we will not see anything resembling the slogans of modern Russian propaganda. And this is not surprising, because there is literally nothing in common between these wars.

Soviet propaganda during the war with Germany was aimed at the following topics: 1) treacherous,  vile attack, the urgent need to defend; 2) a huge threat hanging over the country, a large military force of the enemy, which must be taken very seriously; 3) enlisting the broad masses of the people to help in the war, universal participation; 4) the conflict of ideologies, the need to eradicate the ideology of  Nazism, which has engulfed millions of people.

No matter how much Russian propagandists and officials try to draw parallels with the Great  Patriotic War, all these topics are not present in Russian propaganda. On the contrary, it emphasizes that the enemy is allegedly weak and insignificant, and will be broken in two or three days. And in general, this is not a war, but a “special military operation”, no broad popular participation is required in it. There is no need to talk about treachery and aggression at all. The only common ground lies in the hostile ideology, but here, too, there is a big difference. In the Great Patriotic War, Nazism was  presented as a mass, widespread all-German movement, and in Russian propaganda, this is the ideology of only a small gang, which “settled in Kyiv and holds the  whole nation hostage.” 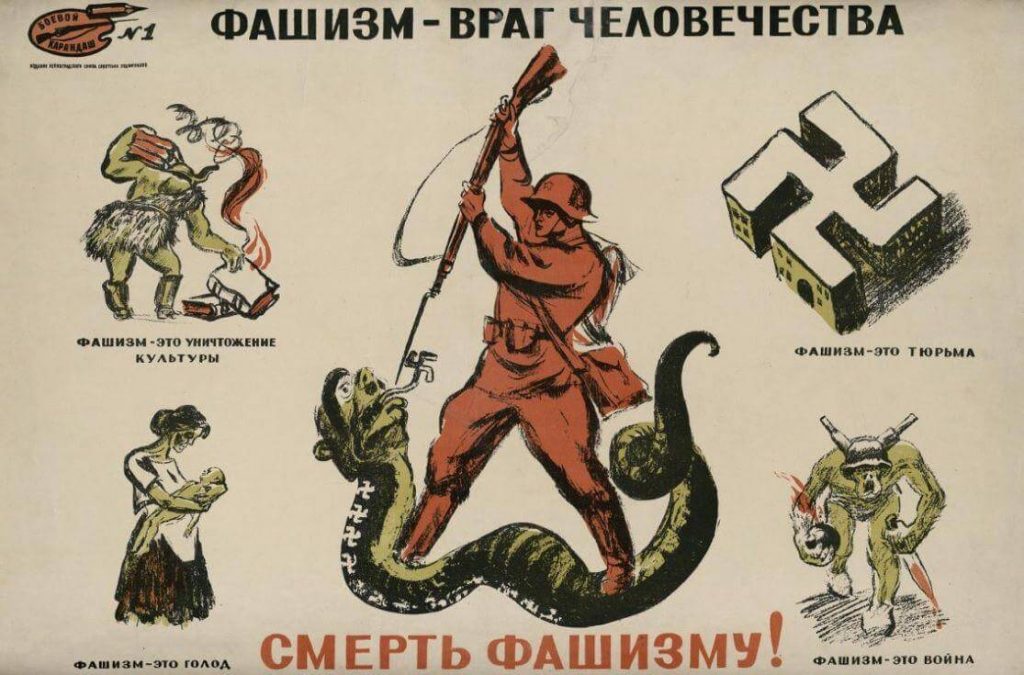 However, despite these clear differences, it cannot be said that contemporary Russian propaganda has no continuity with World War II. Turnovers, formulations and theses, very similar to those that the Russian side has been expounding since the end of February, can be found in World War  II, only they do not refer to the final stage of this war, which accounts for the Soviet repulse of the aggression of Germany and its allies, but to the initial a period in which the Soviet Union itself acted as an aggressor against its neighbors.

The first such case is the so-called “Polish campaign of the Red Army”. At the height of the  German-Polish war, the Soviet leadership claimed that they were forced to invade Polish territory in  order to protect the Ukrainian and Belarusian population, suffering from the “collapse of the failed  Polish state.”

The main emphasis was placed on the need to protect the fraternal peoples, and on the fact that they meet their defenders with rejoicing. 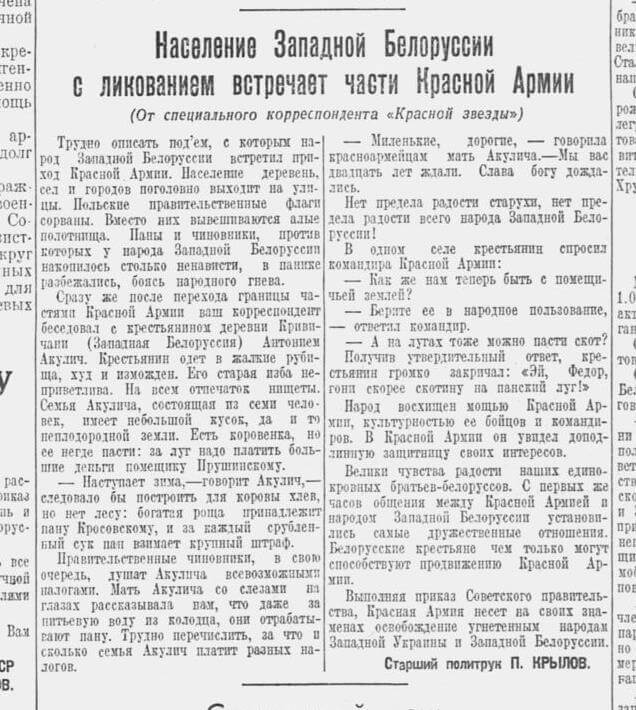 Polish flags are torn down everywhere and replaced with Soviet ones, the oppressed peoples greet  their liberators with joy – this is very similar to how Russian propaganda tried to present its invasion of  Ukraine:

“And this is how our guys are met in the cities of Ukraine. The civilian population does not allow them to pay for food. They just give it for free. In this example, this is Kharkiv. And it’s not fake, it’s not fiction. This video was filmed and sent by my best friend. The Ukrainian people are grateful for the liberation. This is the real truth, not what the whole world shows.” (…) “God bless you guys! We have been waiting for this for 8 years! Not even 8, but starting from the 91st year!” – a local resident shouts to a passing column.

It is also noteworthy that this invasion also has a status similar to the so-called “special operation”.  The fact of aggression against another state is denied in it, and the events are presented as a forced and quick reaction to an unexpected threat to the fraternal civilian population. Only after the end of World  War II, when an additional secret protocol to the non-aggression pact between Germany and the USSR  was made public, did it become known that the participation of the Soviet Union in the seizure of Polish territories was pre-planned and agreed upon. 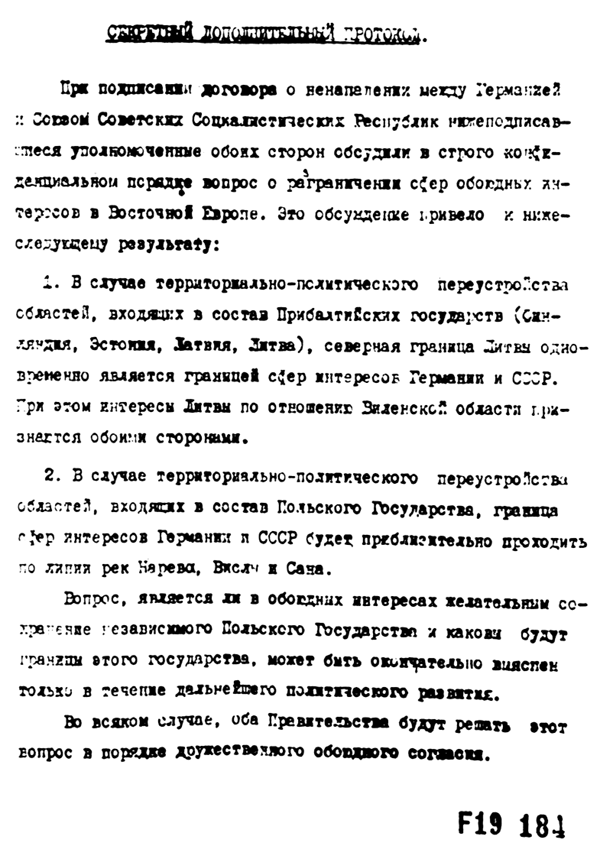 In fact, it was a full-fledged military invasion aimed at seizing the territories of an independent state,  and not all of these territories were inhabited by Ukrainians and Belarusians. This aggression was motivated by the need to protect the fraternal peoples, and justified by plots of widespread popular jubilation from liberation. This narrative is much more reminiscent of the one on which the current military propaganda of the Russian Federation is based. 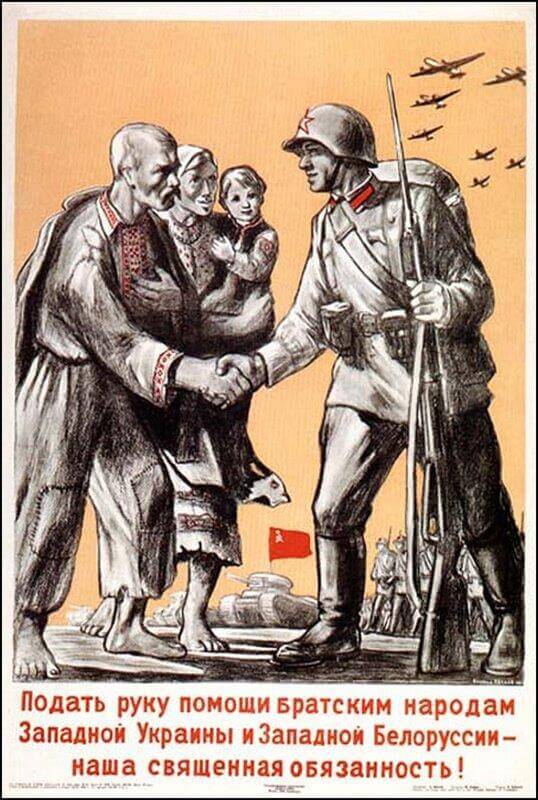 It is equally important to pay attention to the Soviet-Finnish war, which took place from the end of the 39th – the beginning of the 40th year. In this war, the Soviet Union also acted as an aggressor,  attacking a neighbor that was much smaller in size and number of armed forces. This unequal balance of power was ridiculed in every way in Soviet propaganda – Finland was called in it “an insignificant flea, a  booger”, and its prime minister, head of state – “pea jester”.

In the shortest possible time, the Finnish Democratic Republic was created, headed by a Finnish communist who had long lived in the Soviet Union, which was declared the real legitimate government of Finland. It is noteworthy that within the framework of the League of Nations (the predecessor of the  UN), the Soviet Union denied its participation in the war with Finland, claiming that it was only helping to protect the Finnish Democratic Republic, with which it had an agreement of friendship and mutual assistance, and which was bombed by the former Finnish government. 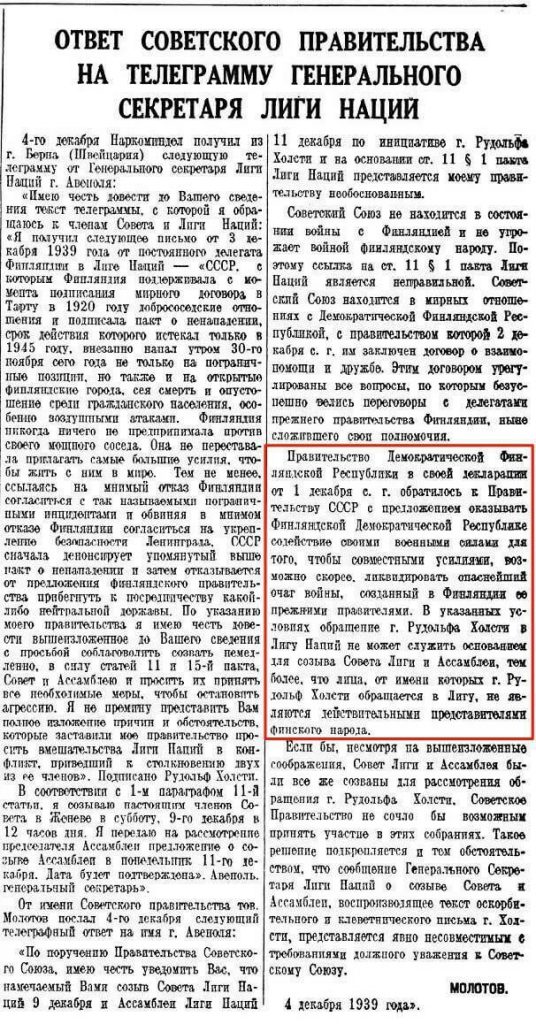 In exactly the same way, treaties of friendship and mutual assistance were concluded with the so-called DNR and LNR. 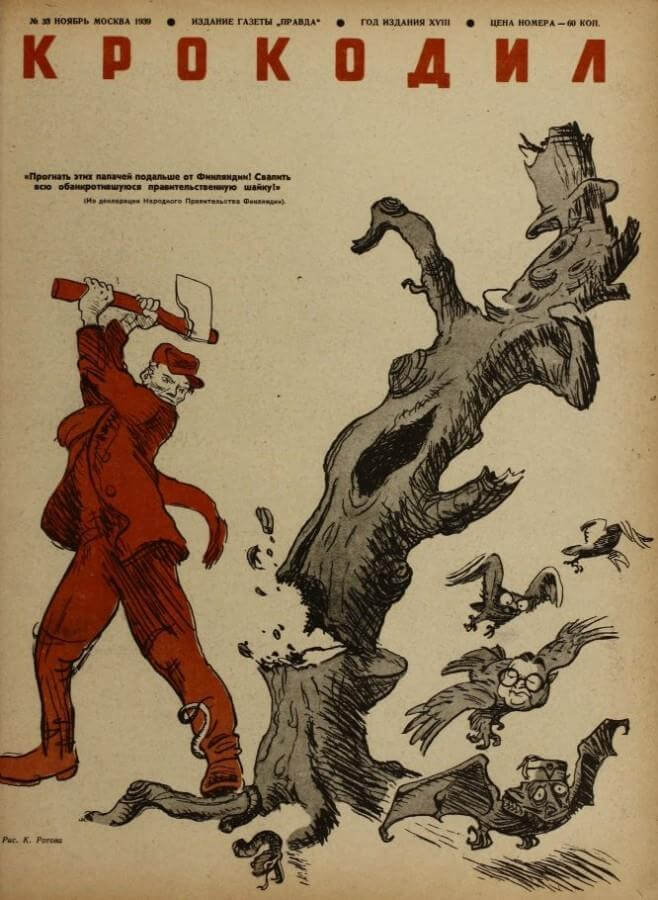 To justify the aggression against Finland, the intentional pursuit of an anti-Soviet course in it,  orientation towards hostile Western countries, preaching hatred for the “Muscovites” and the threat of  “Russian imperialism” were emphasized in every possible way. According to the image created by Soviet propaganda, the Finnish government was completely controlled and coordinated by hostile foreign forces pursuing a policy of inciting war, which went against the interests and desires of the indigenous  Finnish population, thus becoming a hostage to the “gang” in power. As in the case of the invasion of  Ukraine, this narrative suffered greatly due to the valiant resistance that the Finns offered to the Red  Army. During the three months of the war, the Soviet Union irretrievably lost about 150 thousand people – an average of 50 thousand per month. 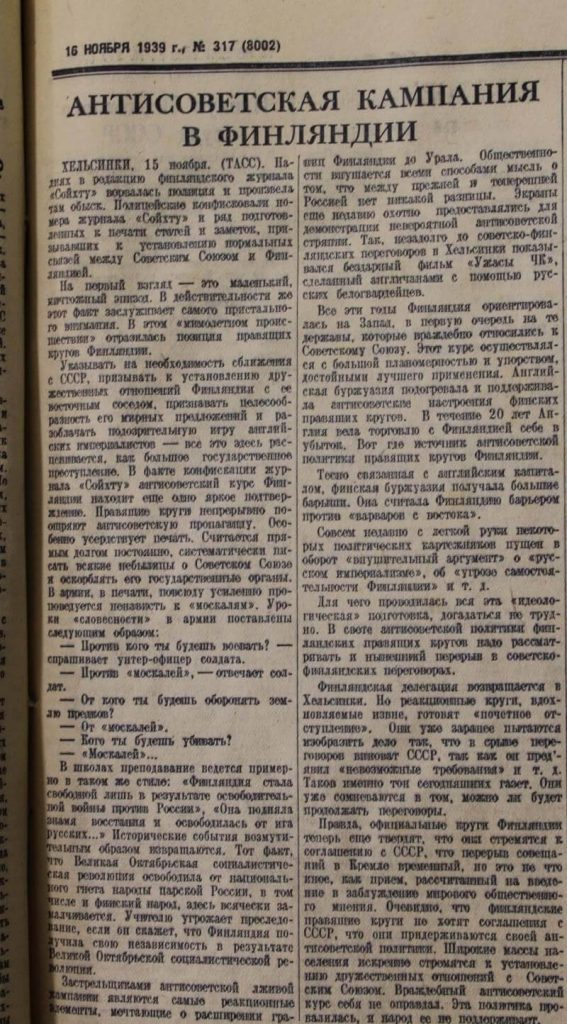 In the future, all these losses will be explained by the fact that Finland receives weapons and commands from the leading Western countries. Stalin himself, summing up the results of the war with  Finland, will declare the following: “What did our victory come down to, whom did we defeat, in fact?

We defeated not only the Finns – this task is not so big. The main thing in our victory is that we defeated the technique, tactics and strategy of the advanced states of Europe, whose representatives were the teachers of the Finns. This is our main victory.”

However, it cannot be said that Finland really lost that war. Despite the fact that they had to sign a peace treaty with the USSR, according to which Finland ceded part of it’s territory, which the  Soviet government demanded to guarantee its security (!), Finland, nevertheless, defended its independence. It was a merit of the heroic courage of its inhabitants, who did not flinch in the face of a  much more numerous and armed enemy; and also of the international community, which has shown great solidarity with Finland. During the war, she received a large number of weapons and almost 12  thousand volunteers from different countries, including 850 Ukrainians.

Summing up, it must be said that presenting the government of a neighboring state as jesters and a gang, ridiculing the size and armament of a neighboring state as incapable of resistance, denying participation in the war and using other terms for the invasion, creating puppet governments at the same time as accusing the enemy of external control, justifying losses and failures by the need to fight  “the entire collective West”, the depiction of the occupied population as liberated – all these propaganda techniques were actively used by the Soviet leadership during the Second World War.  Modern Russian propaganda did not arise from scratch – it had teachers in the person of Stalin, Molotov,  Voroshilov and other Bolshevik leaders. Therefore, when we see parallels with World War II in Russian propaganda, it is important to remember that in this war the Soviet Union did not always fight fairly and heroically. There are many dark pages in the history of this war, and on some of them the USSR itself  acted as an aggressor, using various propaganda techniques to justify its crimes. It is these techniques that are now adopted by the Putin regime.

“You confuse where the capitals are, you are so stuck in Moscow”

War and myth: the cult of the Great Patriotic War and the militarization of Russian society

Strategies of anti-war movements in Russia

Utopia of the future or future utopia: what will we have left after the war

And the world has an hour until midnight

Makhnovshchina, 1918–1921: on the history of the anarchist movement in Ukraine

A couple words on russian imperialism, or why we should support those fighting in Ukraine

"My Soul, Wear Orange," a conversation with filmmaker Anna Zakarian about her work before the 44-day war and whether it's possible to continue working after (RU)

We use cookies on our website to give you the most relevant experience by remembering your preferences and repeat visits. By clicking “Accept All”, you consent to the use of ALL the cookies. However, you may visit "Cookie Settings" to provide a controlled consent.
Cookie SettingsAccept All
Manage consent